Plan B publishes crime and mystery stories from award-winning veterans and the best new voices around the world. New stories every two weeks online, all stories collected in ebook anthologies and a handsome paperback omnibus. Plan B: Volume V now available! 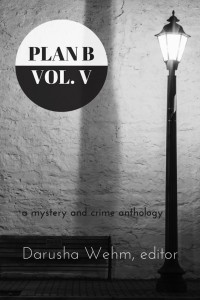 We are thrilled to share that Craig Faustus Buck’s story, “Honeymoon Sweet” is this year’s Macavity Award winner for best short story.

First published in Murder at the Beach: The Bouchercon Anthology 2014, “Honeymoon Sweet” was featured in Plan B Volume V. You can get the ebook of Plan B Volume V here, read the story online here or listen to the podcast here.

Congratulations to Craig and all the other Macavity winners!… Read the rest

It’s been a great couple of years of stories, but as of now Plan B is on hiatus.

We may return in the future with more tales of plans gone wrong, but for now we are focussing on other projects. Thanks for reading, listening, commenting, writing and otherwise being part of Plan B.… Read the rest

The Good Neighbor by Lawrence Buentello

All her neighbors agreed that Henrietta Soames had murdered her husband.

An investigation followed the discovery of his body; his death was ultimately ruled a homicide. But after initially questioning Henrietta the police dismissed her as a suspect. Apparently, they had no evidence to charge her. Eventually the authorities ascribed his death to a botched burglary, which seemed reasonable to an objective observer, but not to anyone living nearby. The police simply didn’t know the circumstances the same way her neighbors knew them, nor did they take seriously her possible motives for killing him, and the crime remained unsolved.… Read the rest

Coffee and Killings by Simon Maltman

The hubbub of the cafe offered a pleasant background noise. It was Saturday and customers in the Starbucks seemed generally relaxed and to be enjoying their conversations. It was the beginning of spring and the morning sun allowed most to be in t-shirts and some to venture into shorts. Russell sat at the corner table in a sleeveless striped shirt and blue jeans. His second Frappucino sat as yet untouched while he leafed through his Classic Rock magazine. He glanced over at his Uncle Marty and then took a sip of his caramel frothy goodness.… Read the rest

Jimmy told me about the burglary almost exactly a year after it happened. Right after we got thrown out of the pawnshop where Jimmy tried to sell the jewelry.

He had gone into a house one afternoon, Jimmy told me, with a guy everybody called Howie The Dog because he could sniff out excellent burglary sites. A shaded corner house in “a nice doctor and lawyer neighborhood,” as Jimmy put it. Howie and Jimmy felt sure they’d hit big money when they saw the tuxedo and evening gown hanging in the mirrored dressing area, instead of in the closet.… Read the rest